Synopsis: Daughter of immortals.
D
longs to prove herself to her legendary warrior sisters. But when the opportunity finally comes, she throws away her chance at glory and breaks Amazon law—risking exile—to save a mortal. Diana will soon learn that she has rescued no ordinary girl, and that with this single brave act, she may have doomed the world.

Daughter of death.
A
just wanted to escape her overprotective brother with a semester at sea. She doesn’t know she is being hunted by people who think her very existence could spark a world war. When a bomb detonates aboard her ship, Alia is rescued by a mysterious girl of extraordinary strength and forced to confront a horrible truth: Alia is a Warbringer—a direct descendant of the infamous Helen of Troy, fated to bring about an age of bloodshed and misery.

Together.
T
will face an army of enemies—mortal and divine—determined to either destroy or possess the Warbringer. Tested beyond the bounds of their abilities, Diana and Alia must find a way to unleash hidden strengths and forge an unlikely alliance. Because if they have any hope of saving both their worlds, they will have to stand side by side against the tide of war.

Let me start off by saying…

Like, seriously. I’m officially totally obsessed with Leigh Bardugo and need to read everything she ever writes/has written after having only previously read Six of Crows (review here). I’m not really the comic book, superhero loving type. I’ve seen a few movies and thought they were okay, I wouldn’t watch them again or go out of my way to find out about the latest releases, etc. So honestly, I don’t even know what persuaded me to pick this up in the first place, other than that it seemed like a good idea at the time.

But boy was it a good idea! It’s one of my favourite books I’ve read this year, and I definitely want to re-read it and secretly (not so secretly) hope that there will be a sequel!

This book had everything I could have wished for and so much more. Diana was fierce and compassionate as our main character, and I loved the diverse cast of supporting characters, especially Nim – she was my fave.

Funny, action-packed and brilliantly written, this book gave me all the feels. I couldn’t put it down and totally recommend it to everyone, superhero fan or not!

I hope there’s more to come.

So I’ve been a bit MIA on the blogging front recently.

I’ve just wanted to take some time to chill out and take some pressure off myself to actually enjoy reading for fun again, rather than it feel like a chore. But I’m going to keep on keeping on with writing review etc. and just make it more casual, so you might not see quite as much from me, but I’ll post at least once a week, so I hope you’ll stick around!

Here’s what I read in September/October:

Empress of A Thousand Skies by Rhoda Belleza ⭐️⭐️⭐️

Things A Bright Girl Can Do by Sally Nicholls 🌟🌟🌟🌟🌟

Shadow and Bone by Leigh Bardugo 🌟🌟🌟🌟🌟 (Technically I finished this on the 3rd Nov. but I’m including it here because I started reading it in October).

My Goodreads Challenge is also well on-track, and I’m currently 2 books ahead of schedule (this is a miracle).

My TBR for November:

Strange The Dreamer by Laini Taylor

The Last Namsara by Kristen Ciccarelli

Siege and Storm by Leigh Bardugo 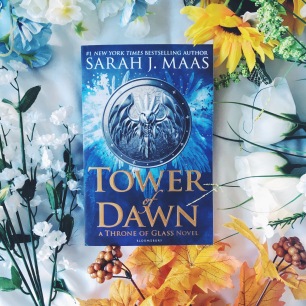 Considering that 2 of these book are 600+ pages each, I think my chances of finishing my TBR for this month are slim to none, but I’ll sure as hell give it a good go!

What will you be reading this month?

QOTD: What’s your favourite SJM book? ✨
QOTD: Do you have any pets? ✨
QOTD: What was the last book you bought? 📚
QOTD: What are you currently reading? ✨
QOTD: Have you set a reading goal for this year? 📚
QOTD: The clock strikes midnight… based on your battery percentage, where are you?
QOTD: What book(s) have you bought recently? ✨
QOTD: If you could go on a voyage to anywhere in the world right now, where would your ship take you? ⛵️
QOTD: Sunset or sunrise? ☀️